Founded in 1887 in Berkeley, The Anna Head School was a pioneer in the progressive education of girls and young women.  Acquired by the University of California in 1955, the school moved to Oakland in 1964, added the coordinate Josiah Royce School for Boys in 1971, and then rose to national prominence as one of the country’s leading K-12, coeducational, private-independent, college preparatory schools.  Channing Hall, constructed in 1892, was the first brown-shingle buildings in Berkeley and helped launch the Arts and Crafts movement in the Bay Area.  Architecturally, the original school complex, which has been called an “architectural gem,” is listed on the National Register of Historic Places, is a Berkeley City Landmark, and was described in a recent article by the National Trust for Historic Preservation as a school that “broke barriers in American architecture and girls’ education.”

The Anna Head School campus, located at Channing and Bowditch several blocks south of the University of California Berkeley, consists of over a dozen structures built between 1892 and 1927 by the school’s founder, Anna Head, and her successor as owner and headmistress, Mary E. Wilson.  The schematic layout below describes the structures and their date of construction; the buildings were later designated with letters A-F by the University. These structures form six buildings: Channing Hall (C), a cozy three-story building that included a foyer, living room, library, kitchen and classrooms on the ground floor, and two floors of bedrooms for the boarding students; The Gables (B), a two-story classroom and residential building connecting four smaller structures; The Cottage (E), which was the residence for the school heads; The Pool/Gymnasium (F); The Study Hall (D), with additional classrooms; and Alumnae Hall (A), a multipurpose room used for assemblies and theater and dance.  With financial support from her mother, who had begun a school in Oakland, Anna Head hired her second cousin, Soule Edgar Fisher, as the original architect for Channing Hall,  Subsequently, the local architect Walter H. Ratcliff Jr., took a major role in the construction of the campus over three decades, designing eight of the structures to create a unified campus in the shingle style; the firm he founded, Ratcliff Architects, today continues its significant work in K-12 education in the Bay Area.

According to the National Register of Historic Places, the “Anna Head School is a complex of buildings consisting of one-, two-, and three-storied wooden structures grouped around a central quadrangle and connected by a covered arbor. The structures resemble designs of medieval country houses of England, a style which was being revived in England and the eastern United States in the 1880s….The complex follows more closely the ideals fostered by men associated with the West Coast Arts and Crafts Movement and represents an early but well-developed solution to the goals of these craftsmen. As such, the buildings are sheathed with unfinished redwood shingles simply applied to blend with the surrounding hills of Berkeley. The interiors continue this theme with rustic paneling, wood floors, and plastered walls and ceilings.”

The Anna Head School and its architectural significance has been the subject of several recent studies.  In a recent article for the National Trust for Historic Preservation, Laken Brooks describes the school’s architectural significance and current efforts to preserve the campus. The application that led to the site being included on the National Register of Historic Places contains a detailed analysis of the elements of architectural significance.  In 2008 Frederic Knapp completed a Historic Structures Report for the University of California Berkeley, a compendium of architectural information.  And in 2009 CAW Architects was commissioned by the University to complete an Adaptive Reuse Study for the Anna Head School Complex to determine the feasibility of restoring it.  CAW later was retained to conduct the beautiful restoration of Alumnae Hall and the Pool/Cottage.

The photos below provide an overview of the historic Anna Head School buildings around the time of their construction, as well as a glimpse of the potential for restoring the entire complex based on the renovation of Alumnae Hall.  The photos are reproduce by permission of the Head-Royce School, Knapp Architects, and with thanks to Stephen Schafer for the pictures of the recent renovations. 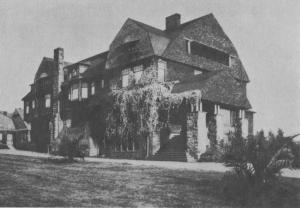 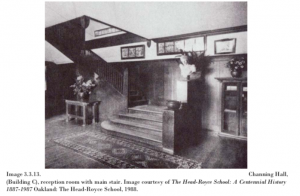 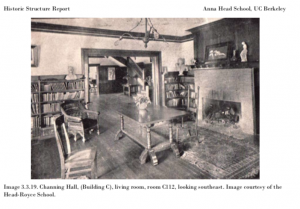 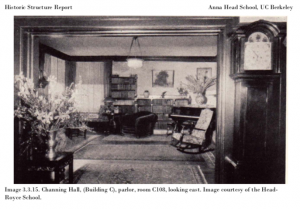 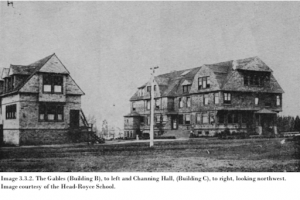 The Gables (building B) on left, and Channing Hall (building C) on the right. Photo courtesy of Head Royce School. 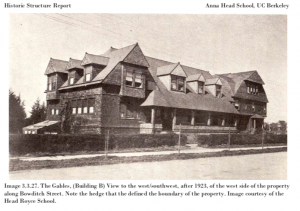 The Gables (building B), Photo courtesy of Head Royce School. 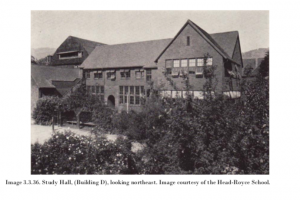 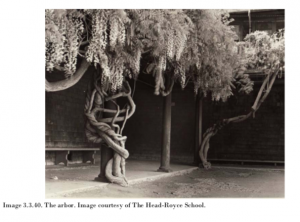 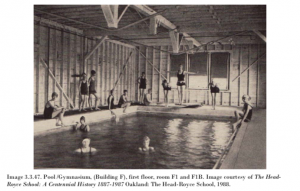 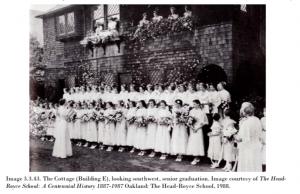 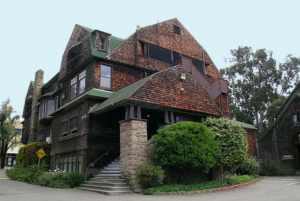 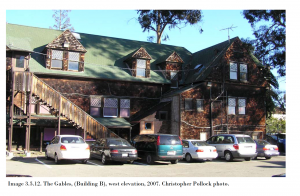 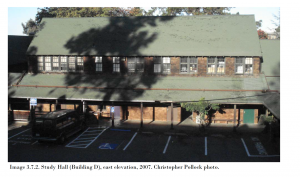 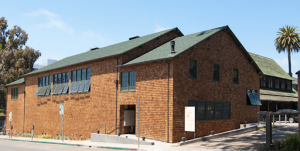 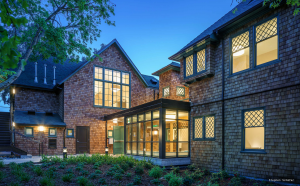